So, I know I have not been posting here a lot recently, but there has not been a lot going on. I have been doing regular inspections on my hive, the garden is growing and looking amazing, and my bees leveled up! 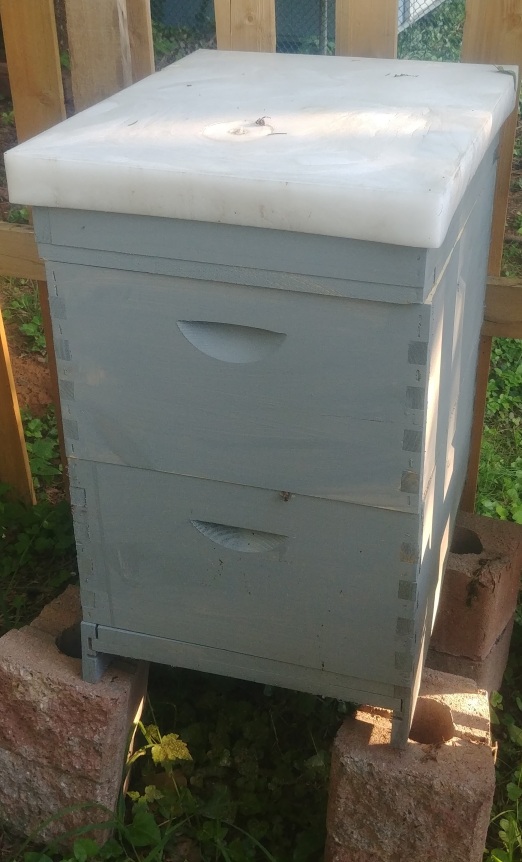 Last time I checked, the hive was almost filled- there was only one frame without comb on it and bees were checking it out. I figured it was time to add the next super, or brood box. This will give the bees more room to spread out and build out their colony to survive the winter. There are ten frames in this box too, so hopefully they build out fast. I was hoping they would level up sooner so there was a possibility of honey this year, but that’s okay. They build at their own pace.

Not all is good and pure with Casa de Abejas though. Last weekend I went to inspect the hive and do a sugar roll test for varroa mites (more on that next post), but I was attacked. I sustained six stings to my legs and chest, pretty much everywhere they could reach that was not covered by the canvas bee jacket. I had white cotton pants on, but they did not stop the bees from getting at me. I had to abandon ship and run before I got attacked even more. I’m not sure what’s up with them.

Based on conversations I’ve had with other beeks, it could be one of three things: (1) the weather was very rainy for days before I checked and the bees may have been cranky because of that; (2) the colony re-queened and the new queen is producing more aggressive offspring; or (3) the colony is queenless. If it is the first one, then no problem. The weather has been better over the last two days, so next time I check (probably Saturday), things should be better. The problem with the other two options is that I need to inspect the hive to determine if there is a laying queen. Which means that I will get stung a bunch more in determining what the problem really is. Let’s hope it is just the weather.

Silver lining: I now know I am not allergic to bee stings. I have an adrenaline pen that I always carry with me, just in case. But I think after being stung six times in a matter of a minute with no reaction, I don’t have to worry.