Baltimore is starting to thaw out from the ridiculously cold weather we had last week. With the help of contractor’s plastic on my windows and sleeping on my couch near the fireplace, I managed not to freeze any of my extremities off. While spring is still quite a ways away, I am slowly starting to get ready for it, as it will need a great deal of prep.

One of the things I desired most in having my own house is having outside space to entertain and hang out in. Since I have a nice patio and a decent back yard, I can do so! But I need patio furniture, and that can be expensive. So in my never-ending quest to be thrifty, I decided to make my patio furniture instead. I did some research and I found an awesome tutorial on how to make seats using pallets and 4x4s. Sounded like a plan! I immediately went to craigslist to look for pallets. I found some! For free! All you can carry! But alas, I went to the place and found out that pallets will not fit in my tiny car. 😦 So I asked some awesome friends that do awesome rebuilds if they could get me some pallets, and a few days later they were dragged into the back yard for my woodworking pleasure. Two of the pallets were the size I wanted (42″ x 42″) and two were smaller, which I will use on other awesome projects. One of the pallets was not in the greatest condition, so I decided to just start with a single-build sofa. And off to the home improvement store I went!

Despite the project starting out with a free pallet, the supplies were a bit more than I expected. I needed a saw, wood screws, stain, 4x4s for the legs, and assorted hardware. I got enough hardware to make two chairs and enough 4x4s to make four and it came out to $120. The most expensive piece of the puzzle were the jointing plates at nearly $2/each since I needed 14 of them. The stain was also pricey, but I am thinking of painting the chairs with exterior paint instead and will probably go back and scope out my options in the next few days.

So, I get it all home and start sawing away. I decided to use the office/back room for this project instead of the craft room because there were no stairs and the door to the yard is right there. I looked at my pallet and figured out how tall I wanted the back to be and started cutting. After I got through the first incision, I realized that there was a plank in the way and it would be much easier to cut the same length down on the opposite side of the pallet. Whoops! To save structural integrity, I slapped a jointing plate on the cut, rotated the pallet and moved on.

I attached the legs with braces and jointing plates and took a seat… it is extremely stable! I had my doubts and imagined that I would flop down on it and it would crack in half under the weight of my plus-sized figure. But then I remembered that pallets are used to move very large loads and, according to the internet, can hold up to three tons. The pallet is wide enough for two people to sit on, but I don’t think there will be any capacity problems in the future.

So after an hour or so of sawing, screwing and singing along to Oliver and Company playing on my computer, I was almost done with my couch… then my drill died. And seeing that I have little upper body strength, I could not manually screw in the rest of the screws so I needed to stop, plug in, and wait.

And now a word from our sponsors…

After an hour my drill was charged enough to finish the job. Before the break, I added brackets to the backside of the back, but it was a bit wobbly, so I added some to the front too. It was sturdy enough at that point to forego more jointing plates so I considered it done. Excluding the pause, it took less than two hours from the time I measured the pallets and figured out what I was doing to flipping it over and calling it a day. 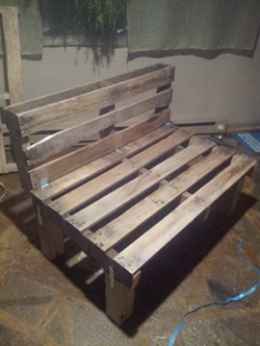 Now all I need to do is sand, prime and paint to finish this part. I also need to make cushions, but that is a post for another day. My plan is to make at least five of these beauties and arrange them in an L shape on my patio, with a nice pallet table in the middle and a small pallet stand to put at the right angle of the L. Before I proceed, I may also add some wood to the underside of the topmost plank of the pallet, creating a little box on the top as a place for people to put their drinks. I’ll be sure to add more pictures of my next steps.

2 thoughts on “Waiting for Spring”